Dollar stores have spread rapidly across the US since the Great Recession, pulling in cash-strapped consumers with their 21st-century twist on the “five and dime” model Woolworth popularised a century earlier.

Close to 2,000 new dollar stores are expected to open this year, according to Coresight Research. That represents almost half of planned US retail openings and bucks the trend in a sector shaken by Amazon, Covid-19 and emptying shopping malls.

This pace of growth has lifted the combined market capitalisation of Dollar General and Dollar Tree, the two biggest chains, to $75bn.

But it has coincided with a period of tame inflation, making it easier to make 30 per cent-plus gross margins on products selling for as little as $1.

Those conditions have changed abruptly, with consumer prices posting their biggest one-year jump for 13 years in July as all retailers struggled with shipping bottlenecks and staff shortages.

Inflation poses a particular dilemma for stores charging $1 for their merchandise. “It’s a real challenge when you have to be the two-dollar store,” said John Strong, a professor at the College of William & Mary’s business school.

Dollar General, which sells most items for under $5, has raised some prices in response. But Todd Vasos, chief executive, acknowledged that its core customer “can ill-afford very many price increases.”

That has raised questions about whether dollar stores can keep finding the affordable products, and the staff, to meet their aggressive growth goals.

Freight costs, said Dollar General, had become “a growing headwind”. Dollar Tree spelt out the scale of the challenge by saying its freight costs would be $185m to $200m more than it had expected in May.

Stocking a stable number of stores when supply chains are strained is challenging, said Mark Cohen, a Columbia Business School professor and former Sears Canada chief executive, but doing so while adding hundreds of new outlets is more so.

Opening those stores also requires finding thousands of new staff in an economy where workers are scarce and wage expectations are rising. Dollar General alone will hire another 50,000 employees between July and September.

Rivals such as Walmart have increased wages, and UBS analysts last October found that Dollar General paid the lowest hourly rates of the 25 retailers it studied, averaging about $9.68. With Amazon warehouses now offering $15 an hour, double the federal minimum wage, dollar stores may struggle to compete.

Michael Witynski, Dollar Tree’s chief executive, said labour shortages had prompted the company to offer $1,000 hiring bonuses at its distribution centres and higher wages in some markets. In May, the company estimated that state and local minimum wage increases could cost it $50m this year.

Enhanced federal unemployment benefits, introduced to ease the pandemic’s economic effects, have contributed to the challenge, Cohen observed, but will end in September.

John Garratt, Dollar General’s chief financial officer, noted that his company had already received an influx of applications after some states ended those benefits early.

The prospect of more parents returning to the workforce as schools reopen may also offer some respite, said Chuck Grom, an analyst with Gordon Haskett.

Dollar stores are still vulnerable if rivals raise wage expectations, said Strong, but they are “labour light” compared with other chains, typically needing just 15 to 20 employees per store. “They certainly are going to be impacted by Walmart raising wages but it’s not going to flow through as it would to other retailers,” he said.

The chains have other reasons to hope that they can push through the inflationary headwinds, from the fundamentals of their business models to their record of adapting to cut costs.

They have long been “the guys who went where Walmart wouldn’t go”, said Strong, pointing out that they had targeted markets that were too small to sustain supercentres.

With three-quarters of the US population within five miles of a Dollar General, such stores can still take market share from local supermarkets and “mom and pop” shops without clashing with the deeper-pocketed Walmart, Cohen said.

The dollar stores’ success, meanwhile, reflects a “bifurcation in the economy”, said Ken Fenyo, Coresight’s president of research and advisory. Last year’s pandemic-induced downturn brought in a wider array of budget-conscious shoppers, and this year’s inflation in the prices of many consumer goods has drawn in more new customers. 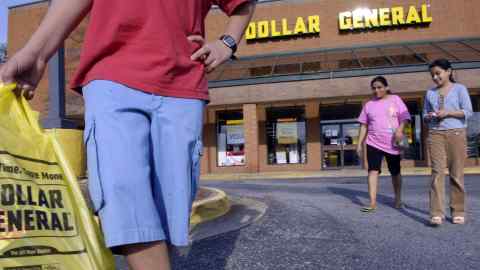 Middle-class shoppers who once saw the nearby dollar store as “the retailer of last resort” have discovered that “it’s a lot nicer than that”, said Strong, noting how the chains have upgraded stores and expanded their range.

In the process, they have become masters at driving a hard bargain with suppliers because, as Dollar Tree’s Witynski told analysts, “pennies matter when you’re selling things for a dollar”.

With no need to stock a full range, “if we have some price increases that we don’t believe we should pass on to [consumers], we’ll drop the [item] and move on to something else,” said Dollar General’s Vasos.

The chains have meanwhile turned to a familiar tactic of adjusting package sizes, Strong said, so “where you used to have six toilet rolls, now you have four”.

With same-store sales declining year on year in their latest quarter, both chains face questions about how much of their growth depends on opening new stores, said Cohen, but inflation alone should not make them less competitive.

“I don’t know that they can keep opening 1,000 stores a year but people said years ago they’d run out of headroom and it hasn’t happened.”