When the Tokyo Olympics finally begin this week, the Japanese organisers hope that months of controversy over Covid-19 will be swept away by the power of sport and, in particular, a 21-year-old swimmer named Rikako Ikei.

Ikei fell ill with leukaemia in 2019 and was expected to miss the Olympics even if she recovered. But the postponement of Tokyo 2020 by a year owing to coronavirus opened the door for an unlikely comeback.

The story of Ikei, who is outgoing and is a fierce competitor, has made her a rallying point for those who want the games to go ahead despite coronavirus, even if only to fulfil the dreams of athletes who have spent five years preparing for the competition.

Coronavirus cases are rising in Tokyo and only 31 per cent of the Japanese public have received a first dose of the Covid vaccine. After initially saying spectators would be allowed, the Japanese government changed its mind this month and decided to hold the event behind closed doors.

“To tell the truth, there are lots of Japanese people who don’t want to hold the Olympics,” said Akira Hayashi, a professor of sports science at Tokai Gakuen University. “But to have her active is one thing that really does create enthusiasm.”

When Ikei set off for a training camp in 2019, she was regarded as a top medal prospect. At the Asian Games the previous year, she dominated the freestyle and butterfly sprints, coming back with six gold and two silver medals.

Tomoaki Tasaka, a former swimmer who now writes about the sport, said Ikei is known for her superb technique and high body position in the water, which allows her to beat significantly taller rivals. “She loves racing and she hates to lose,” he said. “If she breaks a record she’s not the kind to stop there, but to seek always to break it again.”

Then Ikei fell ill. Her coaches rushed her back to Japan where she was diagnosed with leukaemia. “I still can’t believe it,” she told her followers on Twitter. “But if it’s treated properly, a complete recovery is possible.”

Throughout 2019, Ikei underwent gruelling treatment for cancer. “It was draining even to get up,” she told Japanese broadcaster NHK this year. “I was so ill that it felt tiring even to be alive.”

But by the end of the year, she was released from hospital. She went back to training and in August 2020 she started swimming in races again after an absence of almost two years.

“When I saw her return to competition a year ago she looked like an invalid. She was so thin: she didn’t look like an athlete at all,” said Hayashi. “I thought the Tokyo Olympics were unimaginable and she’d have to aim for Paris.”

But Ikei kept improving and in February this year she finished second in the 50m freestyle at the Japan Open. At the Olympic trials, she did not quite reach the cut-off time as an individual, but qualified for the medley relay.

Tasaka said the Japanese medley team is unlikely to be among the medals, but could set a national record and reach the final. “For her to swim at the Olympics will really show what a human can achieve,” he said. 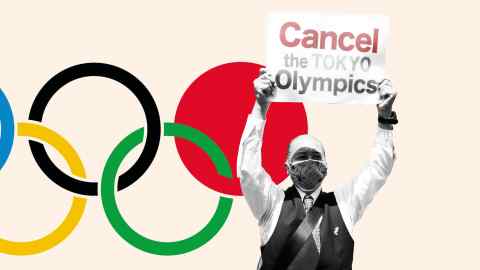 Because of Ikei’s status as a symbol of Tokyo 2020, activists pushing for the cancellation of the Olympics started to bombard her with messages on social media, calling on her to withdraw or announce her opposition to the games.

Her dignified response, refusing to take a position and calling out those who sent “very hurtful messages”, was one factor in allowing Prime Minister Yoshihide Suga to push ahead with the games when Covid concerns were at their height in May.

“From now on I want to really enjoy my progress,” Ikei told NHK. “If I can show little by little how a person who has been to rock bottom has grown to this point, wouldn’t that be good?”

Her next step is Tokyo 2020. When she competes at the end of July, all of Japan will be watching.